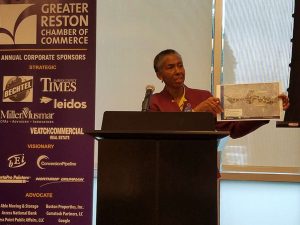 Speaking to community business leaders Thursday in Herndon, Fairfax County Supervisor Cathy Hudgins said the amount of development taking place within Reston’s Transit Station Areas has surpassed expectations and has positioned Reston as an economic driver for the county, region and state.

At the Greater Reston Chamber of Commerce’s legislative panel event, Hudgins said she and others believed Tysons Corner would grow faster than Reston when their respective plans were first laid out.

Hudgins showed her audience a map featuring the three Reston TSAs — encompassing the Wiehle-Reston East Metro station as well as the future Reston Town Center and Herndon stations — and pointed out more than 40 development projects that are in the works within those boundaries.

“This would not be happening if we had not approved the transit that is coming to the area,” she said. “It’s working.”

Hudgins said the Tax Service Districts that have been established in Reston and Tysons in order to help fund transportation improvements in the community were “a lot of work” to develop, but they represent a “success model” for the county. She said increasing public transit and making more walkable communities around the stations is “a creative, very smart way to approach how we develop and keep economic development going.”

“Many folks — not just millenials, but seniors — find it important to be able to live in a community where everything is at their fingertips,” Hudgins said. “[With transit-oriented development], they feel that there is housing that fits for them, there’s recreation that fits for them, and there are restaurants and the thriving other services that they need. They aren’t getting in their car. They want to be able to walk or take transit, and that’s what’s happening here.”

Hudgins said that when the Reston Plan was approved over 50 years ago, it said “Fairfax County would be wise if they would establish these areas, preserving more open space for single-family homes and others, but bringing these more dense areas to concentrate things.”

“Fifty years later, we’re getting there,” she said. “I think it’s going to be the story about how Fairfax County continues to thrive.”