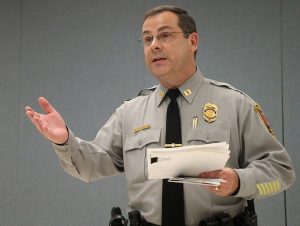 As reports of burglaries, car break-ins, gunshots and more in Reston have led some residents to believe the community has become more dangerous, its top police officer says that’s not the case.

“I think it’s perception, because I’m not seeing [an increase in crime] statistically,” said Capt. Ronald T. Manzo, commander of FCPD’s Reston District Station, speaking to Reston Now after a community presentation Wednesday in Herndon. “Reston is a safe community. Fairfax County is a safe county.”

Manzo said it is important to keep perspective, as the number of crimes that take place within the Reston District Station is relatively small.

“There could be a 100 percent increase because there was one burglary [in a neighborhood] last year and there’s two this year,” Manzo said.

Police statistics for 2016 that were released earlier this year did show decreases in assaults, burglaries, larcenies, vandalism and vehicle thefts from the previous year. There were, however, big increases in drug and weapon law violations.

Manzo said an uptick in reports of night-time gunshots in areas including South Reston and Lake Anne has been noted by police, and they are serious about investigating and keeping a record of such incidents.

“I still ask for your help — if you hear something that sounds like a gunshot, call,” Manzo said to residents during his presentation. “We need to know.”

An afternoon gunfight near the Southgate Community Center last weekend also raised eyebrows and concern in the community. Manzo said there will be more information released about that incident soon.

The captain said one crime that is on the rise is larcenies from vehicles. While he said in some cases this is the result of brazen or clever criminals, in many it’s as simple as residents neglecting to lock their doors.

“They’re walking up and down, [and] they pull on door handles,” Manzo said. “If you’re not locking your car, they go in there, they go through it.”

Residents can sometimes spot these door-to-door criminals with security cameras, Manzo said, and he encourages anyone who gets such footage to share it with police.

But Manzo said it’s not just the car that’s at risk. If a criminal finds a garage-door opener inside, they have access to the house as well.

“We’re trying to motivate the public to take ownership and lock your doors,” he said. “Don’t leave your GPS up on the windshield, don’t leave valuables in the car. Try to be less of a victim.”

Manzo said he doesn’t believe there is an uptick in home burglaries in the area, though. Rather, he said, he believes their frequency has “plateaued.”

The captain said that as the agency and the media become more thorough about reporting incidents around the community, it can make it seem as though crime is running wild. But he insists that is not the case.

“It’s more of an awareness. We do things like Nextdoor, putting the message out to the community when we have issues and stuff like that,” Manzo said. “Reston is a great community. I love being the commander of Reston and I feel like I’m part of the community.”