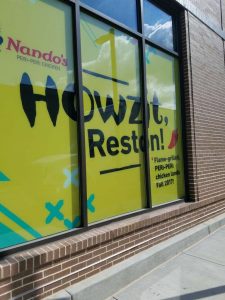 Management has begun hiring for all positions as Nando’s Peri-Peri (12120 Sunset Hills Road) as the Portuguese-style chicken restaurants gears up for its opening day on Nov. 13, according to a company representative.

Nando’s has about 1,200 restaurants in 23 countries on five continents. It was founded in 1987 in South Africa, with its first location debuting in the United States in D.C. nearly nine years ago. Other restaurants are located at One Loudoun and the Mosaic District.

The business will open a little over a month after a Starbucks opened next door. The Starbucks is the fifth in Reston and progress continues at Mezeh Mediterranean Grill, which will also sit next to Nando’s.

The company is hiring for all positions. Company representatives dispersed information outside the location early this week.