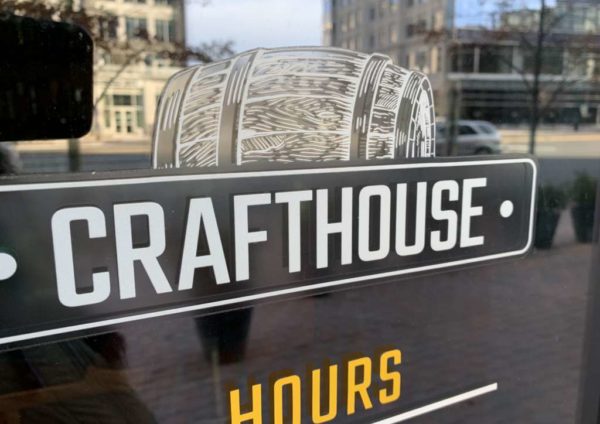 (Updated at 3:20 p.m.) Crafthouse, a growing beer-centric restaurant chain with a prominent Reston location, recently signed a $250 million deal to start franchising across the country.

As first reported by the Washington Business Journal, Crafthouse owner Evan Matz signed a deal with development firm American Development Partners to provide site selection, acquisition, and construction services for more than 100 new Crafthouse locations over the next five years.

It’s a turnaround for Matz, who started his restaurants as franchisees of Florida-based World of Beer before going independent and rebranding the locations as “Crafthouse.” The move prompted a lawsuit from World of Beer, which has since been settled, according to the Business Journal.

Matz told Reston Now that the core idea of Crafthouse is not just locally sourced beer, but entire menus built around local specialties.

“Eat local, drink local,” said Matz. “I want to try to showcase local craft beer or local spirits. As we go forward, if we open one in North Carolina or Tennessee, I want to focus on the local beers there, like their whiskey or wine, but they’re also known for their ribs. If we open in Maryland it might be crab cakes or conch in Key West.”

As they begin looking at locations throughout the country, Matz said he’s excited by the variety of different locales and what they have to bring to the table.

“People love the concept, so I wanted to bring it to other possible franchisees to expand it throughout the country,” said Matz. “There’s a lot of exciting markets out there. Each one is unique in its own right.”

Crafthouse has arranged with American Development Partners to provide 100 percent funding for franchisees planning on placing a Crafthouse inside newly built, freestanding buildings.

While Matz said he plans to go to every location as they open and make sure they are being properly run, he said the emphasis is going to be on local owners independently owning and operating the restaurants.

Matz said Crafthouse is already beginning to get inquiries from across the country about potential new locations, and that he aims to have a franchised location open by late 2019 or early 2020. Matz said interested parties should reach out to Crafthouse through email at [email protected] or through the website.

Among the requirements for a new franchise location is at least $300,000 in liquid assets, a net worth over $1 million, and a credit score of 700 or above. But just as importantly, Matz said he’s looking for franchise owners who understand their community and are committed to it.

“Being directly involved as a local owner is key,” said Matz. “You have to be in touch with the community. Be involved and listen to what the customer wants. Forming your Crafthouse around the local area is key to success.”