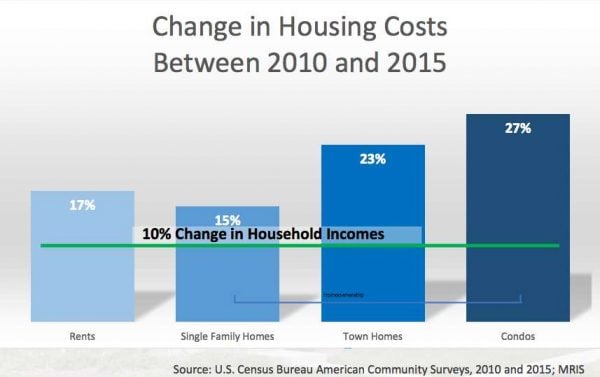 Given that the expansion of the Silver Line is expected to bring more people to already urbanized areas in Northern Virginia, community leaders are working toward solutions around the lack of affordable housing.

The Dulles Chamber of Commerce brought together representatives from Fairfax and Loudoun counties to talk about what this means for the future of affordable housing at a public meeting yesterday evening. Common themes of conversation included roadblocks to construction, current demand for units, land-use policies and even the type of people around town in need of subsidized housing.

The cost of living is not sustainable for lower-income people working in the area, according to Tom Fleetwood, the Director of Housing and Community Development for Fairfax County. Around Fairfax County, from 2010 to 2015, the average income only increased by 10% while the cost of housing increased by 17%.

Fairfax County will require at least 15,000 new affordable housing units in the next 15 years to support families earning 60% of the median income and below, according to Fleetwood.

Currently, there are 30,000 low-income renters in Fairfax County that are paying more than one-third of their income on housing. “This means that they’re what we call a cost-burden and that they have less money to contribute to our economy,” he said.

According to the National Low Income Housing Coalition, four minimum wage jobs are needed in order to afford the average apartment in the county.

Once the extension project is complete, the housing disparity is only expected to grow.

In Tysons and Reston specifically, Fleetwood said that the biggest challenge is the limited availability of land for affordable housing projects. To combat this, updated inclusionary zoning policies have been a large help in rethinking how space is used, he said.

“Visionary zoning policies have produced a substantial number of below-market units that are serving working families in Tysons and in Reston,” Fleetwood said but didn’t volunteer a specific number.

Stephen Wilson, president of the SCG Development, offered previous examples at the meeting of how his company has worked around small parcels of open land, using creative designs in areas like Shady Grove to make the most of space.

“Land is a precious commodity everywhere, but particularly around high-density areas,” he said.

At Ovation at Arrowbrook in Herndon, SCG Development is branching out and working with community planners to incorporate affordable housing close to stations like Innovation Center.