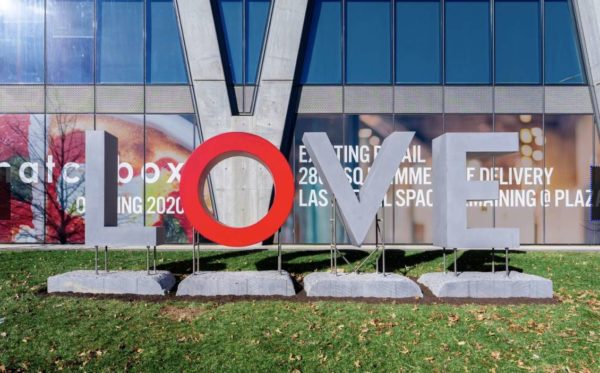 The letters, which were installed in late January, will remain at Reston Station as part of its permanent art collection, according to the Virginia Tourism Corp.

The 7,676-pound display was designed by artist Dylan Myers with glass fiber reinforced concrete and carbon fiber rebar. The colors of the letters were created with glass pieces.  The sign is located on Wiehle Avenue in front of Google’s offices.

Here’s more from the state’s tourism website on the display.

Each letter is supported 18″ from the top of the base with stainless steel all-thread rods in order to achieve the ” floating” effect. Bases were cast with a board form technique, creating depth and character. This is how concrete was cast before the days of plywood forms like you see now. In order to give the exact degregrated look, every single exposed rock was time intensively hand placed prior to casting. After the concrete had cured, the rocks were sheared off by hand with a hatchet. No machines were used for this process. This achieved the true look of a wall that underwent an enormous force.

It’s not the first time Virginia’s LOVE letters have made an appearance in the area. The letters are one of more than 250 installations in towns and cities across the state in order to model the state’s slogan, “Virginia is for Lovers.”

Comstock, the developer of Reston Station, says the inclusion of the installation affirms the company’s commitment to public art.

“Comstock believes the inclusion of art in development projects serves the common good in a manner that enhances architectural designs, landscaping and streetscapes,” says Christopher Clemente, CEO of Comstock.