Work on a new walkway for Innovation Center Metro Station to Dulles Green Boulevard has been completed.

Roughly 270 linear feet of sidewalk were installed at the site, including a handrail and a two-curb ramp.

The project connects with the existing sidewalk from the new Metro station. A community review process was jumpstarted in 2017 by the Fairfax County Department of Transportation.

Recently, Fairfax County completed the construction of a 10-foot wide concrete walkway along Dolley Madison Boulevard in Tysons. The project added 2,400 feet of liner walkway and allows for a safer connection between downtown McLean and area Metro stations. 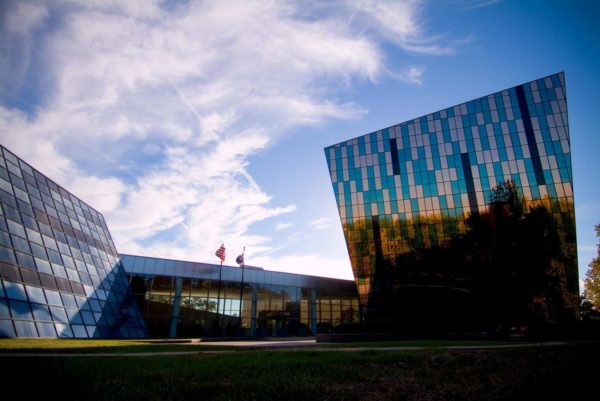 The 149,000-square-foot office building that’s located on a 26-acre parcel near the Washington Dulles International Airport and the future Innovation Center Metro Station was sold for $47.4 million to Origami Capital Partners and Timberline Real Estate Partners.

The sale will help fund the Virginia Innovation Partnership Authority, a new entity for “innovation ad new technology-based economic development,” according to a release. Funds will be allocated directly to the Virginia Research Investment Fund.

Here’s more from the release:

“This event represents a significant milestone toward the goal of delivering to Northern Virginia a development that will entice and excite major corporate tenants,” said Jeff Young, Managing Partner of Origami. “We know companies will embrace the project and resolve to focus on delivering a development to the residents of Northern Virginia they will celebrate. We look forward to our ongoing partnership with the commonwealth, Loudoun and Fairfax counties.”

The General Assembly declared the property surplus in 2016 and directed DGS, which manages Virginia’s real estate portfolio, to dispose of it. DGS and its contracted real estate broker, Divaris Real Estate, marketed the property and received 13 proposals from 12 offerors in its initial solicitation. In October 2019, a Call for Best and Final Offers resulted in 12 proposals from 10 potential purchasers. DGS began discussions with the chosen purchaser in November.

“The sale of this property in an area of Virginia where property development continues at a robust pace provided the Commonwealth an opportunity to receive the most favorable outcome from an open competitive sale process,” said DGS Director Joe Damico. “DGS worked collaboratively with many stakeholders, including the localities where the property resides, the Office of the Attorney General, building tenants, and the new owners to complete the successful surplus property sale that will further the Commonwealth’s economic development goals.”

More delays are expected before the 11-mile extension of the Silver Line, which includes stations in Reston Town Center, Herndon, and Innovation Center.

According to a report by NBC 4, officials say its possible trails will not be rolling until 2021.

Service was expected to begin over the summer, but due to delays with electronic testing and deficiencies in concrete panels and other structural components, opening day was pushed to December 2020.

Metro has not yet indicated when it plans to accept the project from the Metropolitan Washington Airports Authority.

The garage at Innovation Center Metro Station is nearly complete.

Metro officials said the project required $5 million less than what was originally allocated.

Construction on the 11-mile extension of the Silver Line is also nearly complete, but concerns about deficiencies in the concrete panels and concrete ties have stalled the project.

Currently, site inspections and safety testing are ongoing. Previously approved shutdowns for the Wiehle-Reston East Station on weekends were canceled due to pending system integration work.

Metro does not plan to accept the rail project the Metropolitan Washington Airports Authority until both the rail yard and mainline tracks are complete. The start of service is expected to begin by October this year.

The new silver line metro expansion is expected to be completed around September — instead of its July 2020 goal.

Testing is already underway for the new trains, and Fairfax County reported earlier this month that the project is about 97% complete, but several structural issues hinder project completion, according to WTOP.

The concerns revolve around cracks in concrete outside the station, deterioration of panels framing the station and uneven tracks where trains cross one another, WTOP reported in November.

“The Metropolitan Washington Airports Authority and its contractors who are building the rail line are confident the concrete panel issues have been addressed with protective sealant, which will be reapplied approximately once every 10 years,” according to WTOP.

The Innovation Center Station garage is 92% complete, $5 million under budget and is expected to be completed in February, according to Fairfax County’s Department of Transportation (FCDOT).

For the Innovation Center Station itself, FCDOT staff told the Board of Supervisors earlier this week that crews were working on fixing communication systems and placing art in the north pavilion.

At the Reston Town Center Station, crews were installing speakers in the ceiling and working on stormwater management. 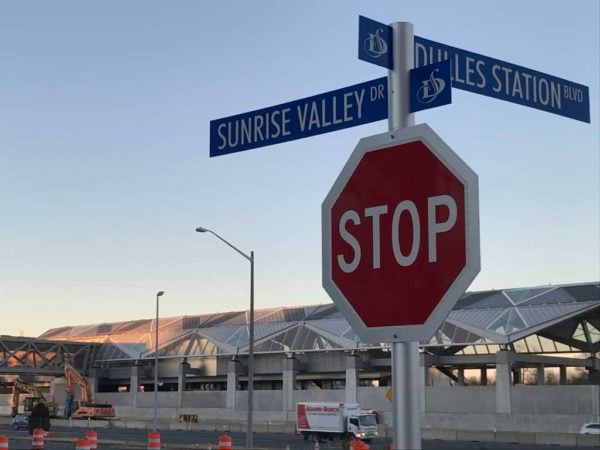 Metro plans to sell naming rights for the Innovation Center Metro Station in Herndon, which is part of the extension to the Silver Line into Loudoun County.

The organization’s board will vote on Thursday to allow a Fortune Global 500 Company to sponsor and rename the Innovation Center Metro Station, according to meeting materials.

“A unique and time-sensitive opportunity has arisen where a Fortune Global 500 Company, currently in negotiations to lease headquarters adjacent to the new Innovation Center Metro station has expressed interest in being the corporate sponsor for this new station,” the Metro documents said.

The move is part of the organization’s attempt to offset revenue lost from ridership declines.

Selling naming rights would be part of a one-time deal. WTOP’s Max Smith reports that a change to explicitly allow other deals is likely in the next few months.