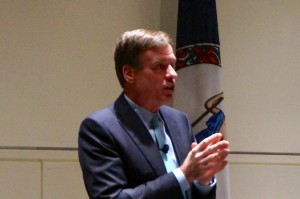 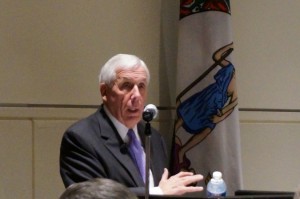 U.S. Senator Mark Warner (D-Va.) and retiring U.S. Rep. Frank Wolf (R-Va. 10th) were in Reston on Friday to talk about the future.

Particularly, the future of the United States if there continues to be budget standoffs. The legislators were speakers at a Town Hall sponsored by the Northern Virginia Technology Council at Sprint headquarters here.

Warner said while he appreciates the recent budget deal that was signed last month, it is just a stopgap measure until a real deal can be agreed upon down the road — one that will ensure a more stable fiscal future for the country.

The recent budget deal set federal government spending levels for two years. It ended three years of bipartisan tension over spending, taxes and the Affordable Healthcare Act that twice brought the nation to nearly defaulting on its debt. The plan raises Federal spending limits by $63 billion for the next two years, ensuring there won’t be more sequestration during that time.

Warner said getting a longterm budget agreement will go a long way in job creation and protecting the economy in the future.

“I still believe the single biggest job creation action we can take is to get our fiscal house in order,” he said. “[We need to] put in place longer deal that would give longterm visibility and that would allow us to say the promise around our entitlement programs will be there and will be sustainable over next 25 years. The tax code that would be pro growth and would not have us lurching from crisis to crisis the we have been today.”

Wolf, who recently announced he will retire from the Hill after 32 years, said he agreed with everything Warner said — and framed his look into the future both personally and monetarily. He said the fiscal situation in America reminded him of the lyrics to the old Simon and Garfunkel song “The Boxer.”

“The song says ‘man hears what he wants to hear and disregards the rest’,” said Wolf. “The nation is pretty much disregarding where we are. I have five kids and 16 grandkids. I look at the future and I am not completely optimistic.

“We are facing decline, and I think we will go into decline if we do not do what Sen. Warner was talking about if we do not have a grand bargain,” he added. “We can have a renaissance in America if we deal with it.”

Wolf pointed out that if the country continues on the current path, most of the money in the future will go towards debt repayment and not transportation, education or research.

“In 2030, every penny that comes into the treasury will either go for interest on debt or entitlements,” Wolf said. “A great nation cannot survive with those numbers. Social Security fund will be exhausted in 2033. “

Wolf says he is confident that Congress will pass the budget in the next two weeks. Then it is time to start work on the next one.

“The bipartisan budget deal was a good thing,” he added. “It showed we can come together in bipartisan way, but it does not solve it in long run.”