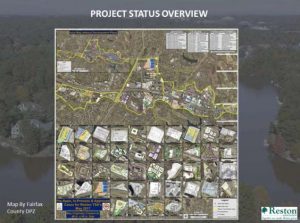 Nearly four dozen major redevelopment projects have been proposed in Reston in the past two years, and residents need to be aware of how much change that means for the community.

That was the message of Larry Butler, Reston Association’s senior director of parks, as he addressed directors during their meeting Thursday. Butler shared information about some of the largest potential redevelopments that remain on the horizon. Butler’s information came from a map that was provided to him recently by the Fairfax County Department of Planning and Zoning.

“When I received it, I was fascinated,” Butler said. “Some of these, most people have not seen.”

Butler specifically shined the spotlight on five projects outlined on the DPZ map.

A total of 44 redevelopment proposals appear on the map provided by DPZ.

“The main point to highlight is there is a lot of activity going on,” Butler said.  “This gives you an idea of the volume of activity that is happening here in Reston.”

As director of parks, Butler noted that the revised Comprehensive Plan calls for three fully lighted athletic fields near the TSAs — something absent from the redevelopment proposals.

“In none of these have we seen a ballfield,” Butler said. “I think we need to drum up a little interest in this … to define locations on some of these major assemblages where these things can occur.”

John McBride, RA’s land-use attorney, said it is impressive to see so many developers willing to invest in the community; however, he added, Restonians need to make sure they remain informed on each application and remain engaged with Fairfax County throughout the approval process.

“It’s a lot of work to get up on these applications, [but] public input is so important,” McBride said. “You are listened to by senior County staff and all of the Fairfax Board of Supervisors members and planning commissioners only when you do your homework [and] you’re reasonable.”

None of the properties highlighted by Butler in the proposal lie within the purview of Reston Association, meaning any meeting with the Design Review Board by a developer would be as a courtesy only.