Construction crews are starting a new development with townhomes starting in the mid $700,000s along Frying Pan Road.

The Floris development by Sunrise Valley Drive will feature three-to-five bedroom homes some 2,301-3,131 square feet in size, according to a Beazer Homes project page for the development, dubbed Towns at Carters Grove.

The rapidly changing area is emerging as a residential neighborhood, with several people buying and moving into newly completed homes in the Foster’s Glen development this past fall as construction there continues.

The Beazer development will span across three new roads in a new cul-de-sac consisting of Tayberry Way, Wineberry Terrace and Loganberry Drive.

The new development calls for three-story homes, according to the company, and county property records suggest there could be up to 35 residences built there, grouped in clusters.

The development comes through subdivisions from New York City-based real estate investment firm JEN Partners. According to Beazer, the townhomes will be coming this spring.

A development for 40 townhomes near the Herndon-Monroe Park & Ride is slated to move forward.

According to Atlanta-based housing developer PulteGroup, which wanted to have model homes ready by late 2020, the project at 12700 Sunrise Valley Drive will have sales in the spring.

As part of the project, a parking garage was built to the right of the existing American Institute of Aeronautics and Astronautics four-story office building. Bethesda-based real estate company JBG Smith has looked to sell the building.

The company is touting the units as four-level luxury townhomes from the mid-$700,000s. The townhomes will generally be located to the southwest of the AIAA building.

Marketing materials promote the development, which the company says offers a walkable lifestyle and “a commuter’s dream” due to access points to the future Herndon-Monroe Metro Station, Fairfax County Parkway, and the Dulles Toll Road. ,

A sign says “Coming Spring 2022,” but according to the company’s website for the project as well as a Zillow listing, that date is when they’ll be available for sale.

A spokesperson for the company, formerly known as Pulte Homes, didn’t immediately respond to a media inquiry.

Meanwhile, development by the proposed Herndon Metro Station could drastically change the northern side of the Dulles Toll Road along the Herndon Parkway.

The town’s mayor, Sheila Olem, said last month during a Dulles Regional Chamber of Commerce event that multiple development scenarios are being considered for 593 Herndon Parkway, where some 222 to 675 units could be built.

The town also agreed to accept $500,000 from a handful of property owners to study how to develop a nearby area, dubbed the Herndon Transit-Related Growth Area, that’s generally north of the Herndon Parkway. 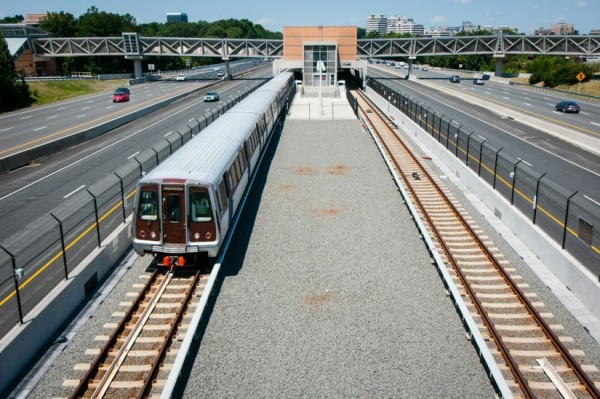 Prices are rising across several new developments along the Dulles Toll Road corridor.

It’s happening as the seasons change this year, affecting locations near existing and yet-to-open Metrorail stations.

At Wiehle Avenue for The Townhomes at Reston Station, which features four-story homes with a garage, prices have increased from $786,500 to $807,500 for its lowest model over the course of this year.

The three- or four-bedroom townhomes have approximately 1,690 square feet of space with luxury amenities.

The base price of another model there, townhomes with elevators, also has increased from the upper $900,000s to $1.02 million and now to $1.075 million, based on figures presented on its website.

Floorplans for different units show two-car garages, a study, three bedrooms, a loft and a rooftop terrace. But designs can vary and include four bedrooms. A base model starts at 2,420 square feet.

The townhome prices come amid a flurry of competition as apartments, affordable housing developments like one near Dulles airport and other homes spring up throughout Fairfax County.

Along with easier to access to money for buyers, new home development continues, too, reshaping existing areas.

“Developers remain bullish on residential projects near the Silver Line and other metro stations,” Maribojoc said in an email. “They will continue to deliver high-rise condominium projects adjacent to stations and lower-rise townhome projects a little further away. Redevelopment of obsolete office buildings, hotels, and retail centers, particularly those impacted by pandemic-related tenant issues, to new residential units may also expand.”

But he said townhome prices are likely to moderate over the next year, noting the mortgage rates are poised to increase in 2022 due to Federal Reserve policy.

“More supply is coming into the market — there were 581 attached homes on the market in September 2021 compared to 373 is September 2020,” he added. “However, this improvement may be marginal as over-all housing supply in Northern Virginia is still below 2 months’ supply based on demand, far below the 5-6 months’ supply of a balanced market.”

Despite the competition, not every company is responding in the same way with pricing. At least one development is even decreasing prices: At Tall Oaks Flats, located farther north on Wiehle Avenue, Stanley Martin Homes has decreased its one-floor condominium price from the mid-$500,000s down to the upper $400,000s.

Meanwhile, near the Innovation Center Station, a new development also by Stanley Martin Homes has had prices in the $500,000s for condos and $700,000s for townhomes. Construction crews have been erecting wooden frameworks for the project and setting up other construction for the company’s Liberty Park neighborhood. The homes offer two to four bedrooms and up to 2,700 square feet.

In Tysons, one project, Union Park at McLean – The Lofts, is about half a mile away from the McLean Station and has 21 homes left along with two model units. So far, 73 have been sold, according to its website.

“Commercial development has been very active adjacent to Silver Line  stations with major mixed-use developments such as The Boro, Reston Station and the Capital One campus,” Maribojoc wrote. “These provide amenities such as grocery stores, retail shops and entertainment in high-density and walkable neighborhoods.”

Residents fall for the urban-like environment in a suburban setting — especially homebuyers relocating from the District, he says.