With COVID-19 induced budget cuts looming, Metro officials are considering pushing back the beginning of service for the Silver Line expansion to July 1, 2021.

The Metro Board of Directors will meet Wednesday to vote on a slate of proposed cuts, including postponing the beginning of service on the newest addition to the Silver Line, as Metro officials grapple with lost revenues from declining ridership during the pandemic.

While service for the second phase of the Silver Line, which would connect the Wiehle-Reston East Station through Dulles International Airport to Ashburn, was slated to begin in the Spring, financial troubles now mean the Silver Line’s expansion opening has been delayed again.

Due to declining ridership from the COVID-19 pandemic, Washington Metropolitan Area Transit Authority General Manager and CEO Paul Wiedefeld said he is projecting a $212 million budget shortfall, worse than what WMATA officials originally projected in their spring budget estimates.

Wiedefeld also said he anticipates WMATA will run out of federal funds from the CARES Act, which Congress passed in March to provide economic relief to localities during the COVID-19 pandemic, worsening budget woes. With more federal funding unlikely coming WMATA will need to make cuts, Wiedefeld said.

“What we have found since we developed our pandemic plan in, as you recall, in the spring that the recovery pace is much slower than we assumed when we approved the budget in the spring,” Wiedefeld said.

If approved, the delay in opening service for the expansion of the Silver Line is anticipated to save Metro $53.8 million in its operating budget for the current fiscal year, according to projections from WMATA.

The Silver Line expansion is the second phase of Metro’s plan to extend rail service from D.C. into Loudoun County, to give riders around the region quicker transit access to and from Dulles International Airport. The first phase of the Silver Line began service in 2014 with five new stations in Fairfax County.

Along with the delayed opening of the Silver Line expansion, Metro has also proposed saving money by restoring bus fares, which were suspended during the pandemic, increasing the number of turn-backs and cutting hours for rail service, ending service at 9 p.m Monday through Thursday.

“Some of these actions in one form or another may need to be taken into ensure we can finish the year on budget without the need for additional jurisdictional or federal funding,” said Joe Leader, Chief Operating Officer for WMATA. 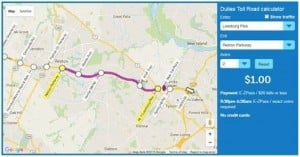 How much will my Dulles Toll Road ride cost?

A new feature on DullesTollRoad.com can tell you in advance. The tool allows drivers to plan and calculate their toll on their computer, tablet and mobile devices.

Tolls are calculated after selecting an entry and exit point from drop-down menus or by clicking directly on the map, says the Metropolitan Washington Airports Authority, which operates the toll road.

Depending on the entry and exit points, one-way rates for two-axle vehicles range from $1.00 to $3.50. Tolls are the same whether paid by cash or E-ZPass.

The resulting route is highlighted on the map and the total toll for the trip is displayed. Tolls displayed are for the Dulles Toll Road only, and do not include other adjacent toll highways.

“This new online feature makes access to toll information more convenient for the traveling public,” Cyndi Ward, Dulles Toll Road manager, said in a release. “The toll calculator is an intuitive planning tool that elevates customer service by giving travelers a predictable experience before they drive on the Dulles Toll Road.”