Approximately 470 people in Reston have lost natural gas services after Columbia Gas of Virginia’s main line pipe in Reston Town Center was damaged, the company says in an alert.

The outage is affecting customers near the intersection of Market Street and Saint Francis Street near the Midtown at Reston Town Center condominiums. The area had been shut down and some buildings evacuated earlier today (Friday) in response to a gas leak.

Columbia Gas spokesperson Russ Bedell told Reston Now that the leak was the result of damage to the gas main by a third-party contractor working for Reston Town Center.

“We were able to shut off the flow of gas, and the situation was made safe,” he said.

Customers in the area have been cut off from supplies while technicians work to repair the damaged line.

“Once repairs have been completed and service restored, Columbia Gas crews will go door-to-door to perform safety checks and relight natural gas appliances for all affected customers,” the company said.

Updated at 2:25 p.m. — The gas leak at Reston Town Center has now stopped after the gas company “clamped the line,” the Fairfax County Fire and Rescue Department reported at 1:20 p.m.

Updated at 12 p.m. — The gas leak situation at Reston Town Center is now stable, the Fairfax County Fire and Rescue Department says, though it is estimated that it will take the gas company a couple of hours to secure the leak.

No injuries have been reported, and examinations of buildings in the vicinity did not reveal any gas leaking into structures, according to the department.

A Fairfax County Fire and Rescue Department spokesperson confirmed that units are currently on the scene in response to a gas leak involving a four-inch gas line.

The department has also confirmed that some buildings were evacuated as a precaution.

Roads in the area of Market Street at the intersection with Explorer Street have been closed due to fire department activity, according to Fairfax Alerts. The alert says to “expect delays if traveling in the immediate area.”

Units on scene of a gas leak on Market Street at Explorer Street in Reston. Four-inch gas line involved. Some evacuations of buildings nearby as a pre-caution. Awaiting gas company to shut line down. Avoid area. #FCFRD #traffic pic.twitter.com/EuM3gx4VMF

David Taube contributed to this report.

Businesses at the intersection of Herndon Parkway and Elden Street have been evacuated after a gas leak was reported around noon today (Thursday).

According to the Herndon Police Department, eastbound Herndon Parkway between Elden Street and Campbell Way is closed to a break in a gas line.

Repair crews are on the scene. It is unclear when the road will reopen. Residents should use an alternate route and avoid the area.

INCIDENT ALERT/GAS LINE LEAK: EB Herndon Pkwy between Elden St and Campbell Way is closed do a break in the gas line. Repair crews are on the scene. Businesses at Herndon Pkwy and Elden St have been evacuated. Use an alternate route/avoid area. Updates as available. #herndonpd pic.twitter.com/OLh7K2lh5r

A natural gas leak has prompted the closure of Parcher Drive between both intersections with Springer Drive as local crews handle a gas leak in the area.

The leak was reported earlier this afternoon at the. 2200 block of Chamblee Place. Several townhouses have been evacuated.

The road closure is expected to last between six to eight hours.

Units are on scene of a gas leak in the 2200 block of Chamblee Place in the Herndon area of Fairfax County. Washington Gas is on scene. Several townhouses have been evacuated. @HutchisonEagles has not been affected. pic.twitter.com/8dp42oePka 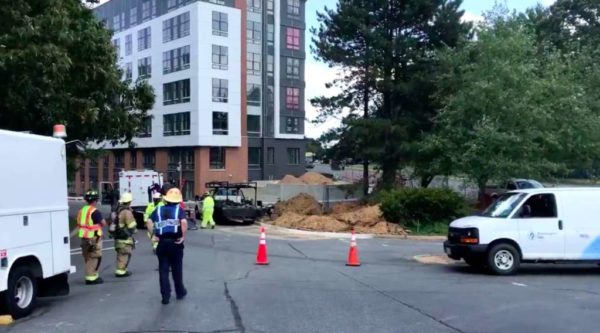 Local crews are tackling a gas leak on the 11500 block of Commerce Park Drive.

According to the Fairfax County Fire and Rescue Department, crews from Washington Gas have clamped the leak, which is suspected to have struck a 2” gas line.

Local fire and rescue crews are now going in to service the area.

UPDATE gas leak in the 11500 block of Commerce Park Drive in the Reston area. @washingtongas on scene and have clamped leak. No injuries. #FCFRD units going in service. pic.twitter.com/dMTyfB92of

Local fire and rescue crews were on the scene of a gas leak in Reston earlier this week.

A gas leak occurred on the 12100 block of Sunset Hills Road around a little before 10 p.m. this past Tuesday (July 9).

Hazmat crews opted to flare a tank — a technique that burns gas in the tank to reduce volume or lower internal pressure.

A spokesperson for the Fairfax County Fire & Rescue Department told Reston Now that only the pressure relief valve was damaged.

“No buildings were evacuated as everything was under control,” the spokesperson said.

A natural gas leak prompted the evacuation of four commercial buildings late Friday afternoon as a precautionary measure, according to the Fairfax County Department of Fire and Rescue Services.

Units were on the scene on the 11500 block of Sunset Hills Road where the gas leak is suspected to have occurred.

In a statement, authorities described the situation as “stable.” No injuries were reported. 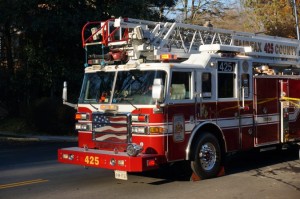 Firefighters have shut down part of Sunset Hills Road near the Wiehle-Reston East Metro station due to a reported gas leak.

Sunset Hills Road between Metro Center Drive and Wiehle Avenue is currently closed to traffic, according to Fairfax County Fire and Rescue officials.

Though nobody has been injured or sickened by the leak, authorities are advising people nearby to stay indoors as a precaution.

“They are checking some buildings,” said Fairfax Fire and Rescue spokesman Bill Delaney. “But nobody complaining of any illnesses.”

Workers struck and ruptured a gas line about two miles away from that area yesterday.

We’ll update this story as we know more. 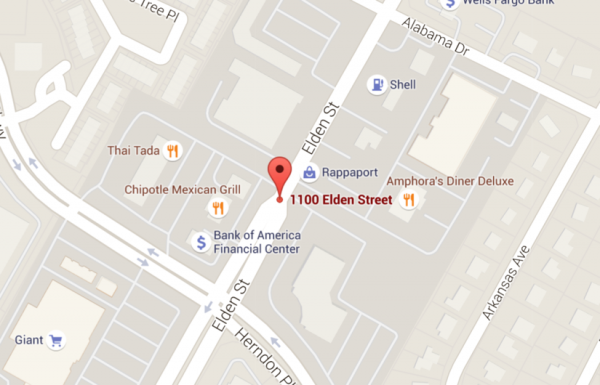 A gas leak in the 1100 block of Elden Street in Herndon  has closed traffic in both directions, Fairfax County officials said.

Elden Street is closed in both directions from Herndon Parkway to Alabama Drive as of 1 p.m. and will be closed for about five hours, officials said.

Herndon Police have not said how the gas leak started. 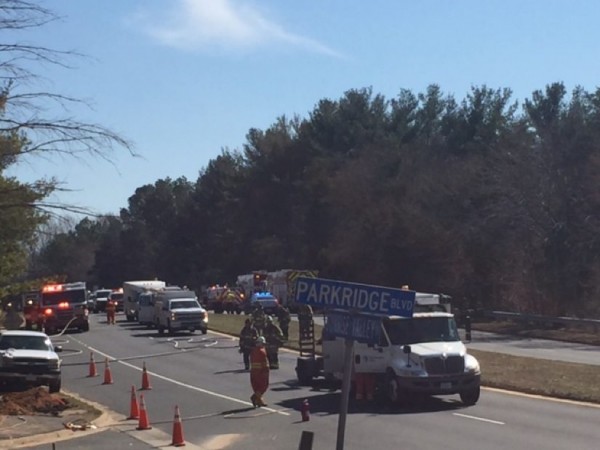 Original story, Wednesday 11:30 a.m.: Sunrise Valley Drive will be shut down in both directions for most of Wednesday as crews fix a gas leak.

A gas main was hit by a construction crew shortly before 11 a.m.

Traffic is blocked from Parkridge Boulevard to Hunter Mill Road. Fairfax County Police at the scene said it could be several hours before roads are reopened.

Reston Now will check with Sunrise Valley Elementary School for information should it affect school pickup and buses this afternoon.

Last week, there was a similar incident in Reston. Reston Parkway was shut down for hours, disrupting traffic on many nearby streets, due to a gas main break caused by a construction crew. 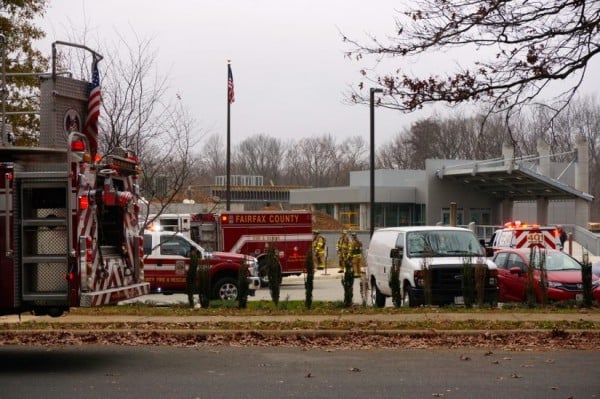 Students and staff at Reston’s Terraset Elementary were on lockdown in the school cafeteria for about an hour on Wednesday due to a gas leak at the school.

Fairfax County Fire and Rescue crews were called to the school about 11:40 a.m. for a smell of gas. The leak, in the rear outside of the building, was located and capped. Crews determined it was safe for people to remain in the part of the school away from the leak while it was fixed.

Most students returned to their classrooms or safe areas of the building by 12:45 p.m. Upper-grade students in the temporary classrooms outside the school remained in the trailers. There were no injuries.

“As always, we were pleased with the appropriate and responsible conduct of our students and the professional manner of our staff,” principal Lindsay Trout said in an email to Terraset parents and guardians after the school day resumed. “We truly have a responsive and caring school family.”

Terraset’s grounds have been an active construction site for more than a year as the nearly 40-year-old school is undergoing a major renovation.