The Vantage Hill Condominium Association has tweaked its designs for the vacant pool and parking lot in response to concerns from neighbors and the Reston Association’s Design Review Board this summer.

The pool, part of the condominium complex at 11619 Vantage Hill Road, has accumulated algae and mosquitoes for about seven years. Craftmark Homes, a homebuilding company with property in Virginia, Maryland and D.C., is proposing a facelift for the 2.1-acre plot that includes new townhouses.

The new plan allows for fewer townhouses than the 31 that were originally drafted, Rob Schumann, the treasurer of the Vantage Hill Condominium Association, told Reston Now. They will also be situated farther back from the road.

Vantage Hill, comprised of 152 one- to three-bedroom units, was one of Reston’s early developments, built in the 1960s. But condo association members say the complex is falling apart and the high HoA fees barely cover upkeep, let alone needed upgrades, which could cost $30,000 to $40,000 per unit, Schumann said.

The project would bring in the needed cash to redo the 60-year-old shared electrical and water meters, which are plagued with problems, and replace the single-paned windows and sliding doors with energy-efficient ones.

“The answer to people who say, ‘Vantage Hill should take care of itself,’ is that’s exactly what we’re doing,” he said. “We’re not going to the government, and we’re not asking for a handout.”

When the project came before the DRB on June 23, neighbors said there were too many townhouses and predicted increases in light pollution, traffic and tree removal. Some cautioned against any work, while others asked for measures to calm traffic and minimize noise.

In response, Vantage Hill and Craftmark have agreed to build fewer townhouses, although the final number has not yet been decided, Schumann said.

The townhouses will be farther back from Wainwright Drive, which he said responds to concerns that having them too close to the street would break with the character of nearby clusters and subject more trees to the ax.

The updated plan will receive more feedback from the Reston Association’s Design Review Board during a task-force meeting on Oct. 1. A vote is not planned at the meeting, Schumann said. After the meeting, if no further work sessions are needed, the association and Craftmark Homes will present their project to the board in a regular meeting, when members will vote whether to proceed.

The Design Review Board will participate in a work session for the Vantage Hill redevelopment/in-fill application on October 1, 2020 held via Zoom.

This application has no defined timeline, said Mike Leone, the spokesman for the Reston Association, in an email. Infill and redevelopment applications typically involve multiple work sessions and assignment to the agenda of full Design Review Board meetings, he said.

After five years spent finding a way to fund these updates, members are pinning their hopes on selling the 2.1-acre plot to Craftmark Homes. The homebuilding group is the third developer to work with the association.

As for carving out land to sell to a developer, Leone said “it is not uncommon for associations and their boards to consider all of their options as they prepare to pay for costly infrastructure repairs.”

For seven years, the pool behind Vantage Hill Condominiums (11619 Vantage Hill Road), boxy housing built in the late 1960s, has been closed. Now, discussions are underway to build townhouses on the pool site to save a condominium building that its community association leadership says is on a slow and steady decline.

The assocaition hopes to use revenues generated from the project to help finance around $4.5 million in needed infrastructure upgrades. Rob Schuman, the community association’s president, told the Reston Association’s Design Review Board last night (April 16) that the association has been grappling with major infrastructure needs for years.

The 152-unit development, which has 24 garden-style buildings, was one of Reston’s first projects and offers market-based workforce housing. Prices for a one-bedroom unit start at $140,000 and up to $250,000 for a three-bedroom unit.

Schuman said the association does not have enough money to take on infrastructure improvements on its own. Members pay yearly HOA fees between $420 and $680. Pipes leak every week, the electrical system is 60 years old and doors and windows provide little to no insulation, Schuman said.

If approved — a process that could be years away — the townhouse community could become its own cluster with its own community association. So far, association members stressed a formal proposal is forthcoming and discussions are preliminary.

Charlie Hoffman, a DRB member, said he worried that the infill development could hike up the prices of the condo units.

“I would hate to see them get so nice that people can’t afford to live in them anymore,” Hoffman said. Overall, he said the project could bring new energy to the aging building. 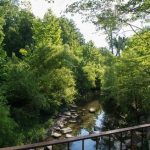 Representatives from the Northern Virginia Stream Restoration Bank (NVSRB), which include wetland experts and staff from the Reston Association (RA), have issued updates over the past week, informing residents of the status of various local stream restoration projects, and warning of new projects set to begin in November.

Currently, restoration of the streams at Brown’s Chapel Park and Vantage Hill is underway, and RA staff said the areas will be under construction through the end of the year. Staff posted on the RA website last week reminding local residents that the areas are closed during working hours, and asked everyone not to cross the gates or safety fences.

Construction at Brown’s Chapel Park is expected to be completed in December, and at Vantage Hill in January.

In November, restoration of Lake Anne East, near Inlet Cluster, and Lake Anne West, near Waterview Cluster, is set to begin.

Restoration of the Buttermilk and Tall Oaks streams are scheduled for early 2018. 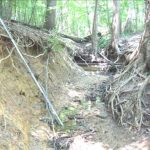 RA staff said they expect construction of all stream channels to be completed by fall of 2018.

RA staff said that they expect all wood acquired for the project will be used in the construction of thestreams themselves, but that any wood that is left over will be split into firewood and will be made available to Reston residents at Brown’s Chapel Park in the lot near the upper ball fields.

Once all restoration construction is complete, RA staff said hundreds of new trees will be planted along Reston’s streams. END_OF_DOCUMENT_TOKEN_TO_BE_REPLACED