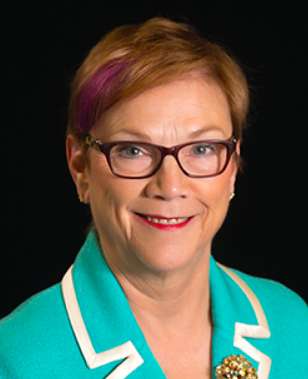 Reston Association’s Board of Directors elected Catherine Baum to the position of board president Wednesday night.

“Let me state clearly for anyone concerned: I am not now and nor will I ever be for unfettered development throughout the PRC,” Baum said. “I supported and will continue to support every motion made and seconded relative to RA dealings with Fairfax County on this topic.”

While the Fairfax County Board of Supervisors voted in March to “indefinitely defer” the consideration of a proposed zoning amendment regarding the PRC, the hotly debated issue will likely resurface in the future.

Baum also outlined her priorities as the board’s president.

“Our most important job this coming summer and fall is to pass a 2021 biennial budget,” Baum said, adding that the board must support the new Chief Executive Officer Hank Lynch and use data.

“We will have to make tough and sometimes unpopular decisions made on facts,” she said.

“I would like to say I am disappointed in the way my colleagues have conducted discussion in the past year, and it’s because whenever there has been a dissenting or an opposing view, it has often been ridiculed. It has often been cut short,” Iyer said.

Iyer said that he has seen board members aim to form a majority to win motions.

“My request to the future president is to try to be inclusive and to make sure that all board members seem to be heard,” Iyer said. “These board discussions are not about proving your point. They’re about making progress.”

In response to Iyer’s concerns, Baum said that “each of you holds yourself accountable to everyone else on this board.”

The other officers chosen are: