Herndon officials are slated to move forward with two regional transit applications to help improve traffic, sidewalks and more, including the addition of a key connection for vehicles by the Herndon Parkway.

The Herndon Town Council could vote at its regular meeting today to seek the funding through the Northern Virginia Transportation Authority for projects on Sterling Road and Herndon Parkway.

Funding for the projects could be distributed around 2028 if approved by the regional transit authority.

The Sterling Road project would add turning lanes and evaluate whether a new signalized intersection could be created at Crestview Drive. The entire project would involve upgrades from Elden Street to Rock Hill Road, and the town is seeking up to $500,000 for funding.

Staff plan to present the concept design plans and estimated costs next summer.

The other project, creating an extension of Worldgate Drive to pass through an office park by Van Buren Street to connect with Herndon Parkway, has been eyed for years by town officials. The project also includes sidewalk and cycle track improvements, continuing the undergrounding of utilities and other pedestrian crossing upgrades.

The total project would cost over $6.5 million, and town officials are seeking millions of dollars to assist with the effort. The town has already been allocated $1.8 million in funding through the Northern Virginia Transportation Authority for the project. This application would seek up to $1 million more.

It’s separate from a bus bay project that’s ongoing there that’s slated to serve the Herndon Metro Station, which should open to all in the spring.

The 11.5-mile extension from the Wiehle-Reston East Station to Dulles International Airport and beyond has been delayed for years.

The majority of the increase is the result of $6.5 million for the water and sewer fund and $1 million for parking linked to the redevelopment of downtown Herndon.

Modest revenue growth is projected over the next year, Ashton said. The budget reflects a nearly three percent increase in assessed property tax values. The town’s real estate tax rate will remain at $0.2650 per $100 of assessed value.

In the proposal, funding is allocated for the Town of Herndon’s ongoing partnership with Comstock for the redevelopment of downtown. It includes $500,000 this year for an interior build-out of an 18,000-square-foot arts center, $2.9 million to relocate overhead utilities underground and $1.4 million for street improvements along Van Buren Street from Herndon Parkway north to Spring Street.

A summary of the budget is available online. 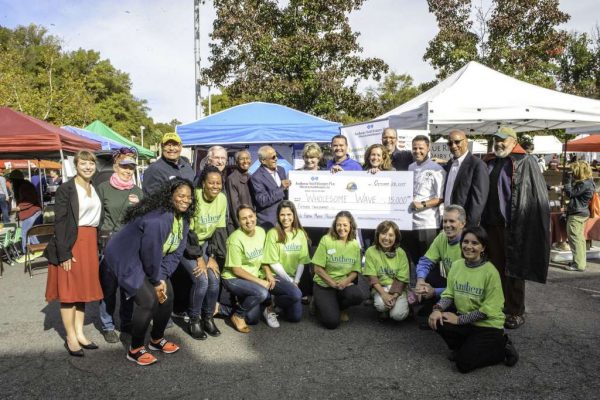 Reston Saying Goodbye to Amazon Fresh? – Following its recent acquisition of Whole Foods Markets, Amazon announced recently it will be scaling back its fresh grocery delivery in parts of seven states at the end of this month–and parts of Northern Virginia and Maryland appear to be on the list. Currently, Amazon Fresh–a service available for a monthly subscription fee to Amazon Prime members–delivers fresh groceries locally in Reston as well as Oakton, McLean, Fairfax, Arlington, Annandale, Alexandria, Burke, Springfield, Fort Washington, Woodbridge, Dale City and Suitland. Reports indicate the only nearby areas that may see continued service are Baltimore and Washington, D.C. [Bloomberg News]

Nearby Commuter Garage To Close For Two Weeks – Due to construction of the new Fairfax County commuter parking garage at the future Metrorail Silver Line’s Herndon Station site, the access road from Sunrise Valley Drive to the Herndon-Monroe park and ride facility will be closed starting this Friday. Nov. 10 through Sunday, Nov. 26. Commuters who wish to use the existing Herndon-Monroe garage during this time will need to enter and exit the facility via the Dulles Toll Road (Rt. 267). This detour will require drivers to pay a $1.00 toll upon exiting the garage with an E-Z Pass or exact change. Commuters are encouraged o consider using the Reston South Park and Ride located at the intersection of Reston Parkway and Fox Mill Road, where parking is free but limited, or the commuter parking garage located at the Wiehle-Reston East Metrorail Station, where parking costs $4.95 per day, payable by SmartTrip card, or credit and debit card only. Fairfax Connector bus commuters in the area should expect significant felays during the construction. [Fairfax County Government]