When Cathy Tunis’ neighbor recruited her to the Reston Garden Club in 1976, she heard the group wasn’t one where members wore white gloves or didn’t dig in the dirt.

True to that description, Tunis noted a 50th anniversary luncheon at Hidden Creek Country Club had members who have participated in gardening projects throughout the decades to beautify their community.

The club celebrated longstanding and new members, drawing over 50 attendees for the luncheon. It also raised money with a silent auction to create a $1,000 scholarship fund for South Lakes High School graduates to pursue horticulture or related studies.

“We’re here to celebrate the history of the garden club,” said Tunis, the chair of the group’s 50th Anniversary Committee.

Kathleen Driscoll fended off bidding over one such auction item: a “Munchkin Fire” hosta featuring a miniature home in the pot next to the perennial. Driscoll noted she had the perfect place to put it on display at her own house.

The 75-member group has had numerous milestones throughout the decades, from holding a weekly TV show from 1978 to 1983, raising money for an abstract art sculpture outside the Reston Regional Library that was dedicated in 1992, delivering gardening projects at schools, new intersections and more, holding an annual sale of holiday decorations, helping support the planting of memorial trees and other activities.

Several of its members stopped their involvement to pursue careers over the years but have since returned. Barbara Pelzner did so to teach fifth grade but is now back in the club — able to attend its daytime meetings.

Some of the club’s key outreaches continue to remain, such as providing Holiday Greens arrangements to support public service facilities, maintaining the Wildflower Trail at the Walker Nature Center and tending to plants at the center and the Reston Regional Library.

The club started in 1970 when a few residents noted the need for such a group. Joanna Davis and Diane Jowett Shoup shared their ideas with Reston’s outdoor director, Vernon Walker, and the two women soon assembled a group of interested participants, from those with green thumbs to others with little gardening experience.

Shoup teared up during the luncheon when speaking about her friend, who died in 2012. 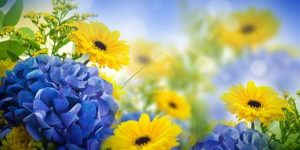 Some of Reston’s most beautiful private gardens will be on display for one day only when the Reston Chorale’s “Gardens of Note” tour kicks off on June 3.

The event benefits the Reston Chorale.

Five gardens spread out over three Reston neighborhoods will be part of the tour.

“Selected with the help of the Reston Garden Club, the five private gardens feature intriguing plantings, hardscapes, water features, and surprises.  All of these properties have successfully faced the challenges of gardening in Reston such as slopes, erosion, clay soil, shade and deer,” organizers said in a press release.

The gardens featured on the tour will include, as described by organizers:

Tours are self-conducted and can be taken at one’s own pace between the hours of 10 a.m. and 4 p.m. A map will be given at the visitor’s first stop, and visitors must transport themselves between the five stops. Those who purchase their tickets before June 2 can have a map mailed to them in advance of the event.

Following the tours, an open house will be conducted by Hidden Lane Landscaping in Herndon from 4 to 6 p.m., with light refreshments and music by the Reston Chorale.

Tickets are $20 and benefit the Reston Chorale.