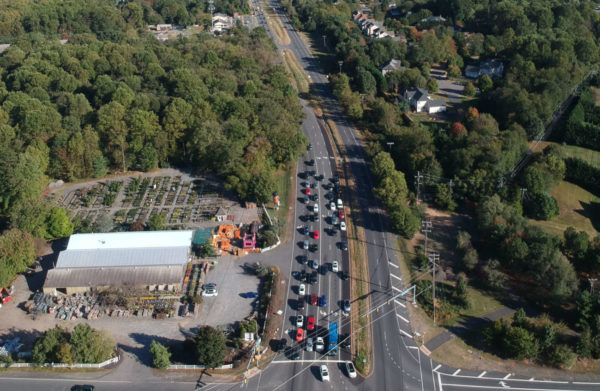 State crews are on the scene of the intersection of Reston Parkway and Baron Cameron Avenue.

According to the Fairfax County Police Department, traffic lights at the intersect are “on flash.”

The Virginia Department of Transportation is on the scene to investigate the issue. It is unclear when normal operations will resume.

No other road closures or traffic impacts have been reported due to rain expected today and through tomorrow. 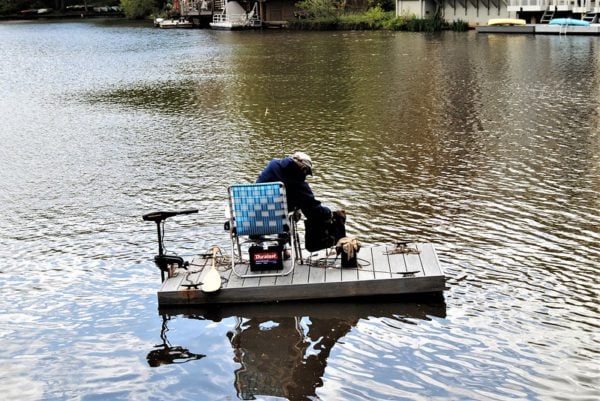 Women Robbed at Bus Stop — Three men displayed a firearm and demanded money from a woman at a bus stop on the intersection of Town Center Parkway and Baron Cameron Avenue. The men ran away after the woman flagged down a passing motorist. The incident happened on April 30 at around 10:35 p.m. [Fairfax County Police Department]

Free Seminar for Family Caregivers — The county is hosting a free online seminar for caregivers of older adults. The first seminar begins on Friday (May 8) and covers the topic of yoga. [Fairfax County Government] 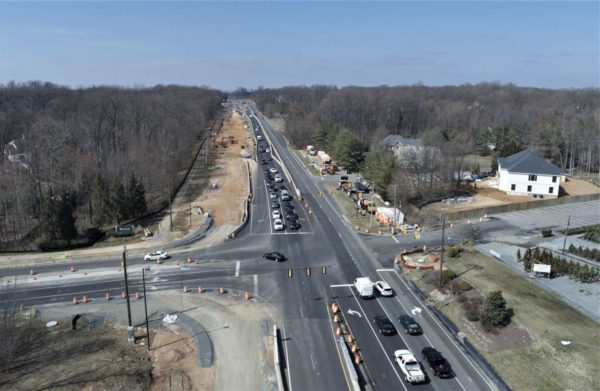 State crews are taking advantage of a major dip in traffic as a result of the COVID-19 pandemic. The Virginia Department of Transportation is planning extended closures on several areas of Route 7 in order to fast track major improvements to the roadway.

The extended lane closures were temporarily extended due to “the significant decrease in traffic as a result of school closures, increased telework and limitations on public gatherings,” according to a statement from VDOT.

Here’s more from VDOT on what to expect through Friday, April 17:

VDOT is working to improve a seven-mile stretch of Route 7 between Reston Avenue and Jarrett Valley Drive. The road will be widened from four to six lanes and several intersections will be updated. 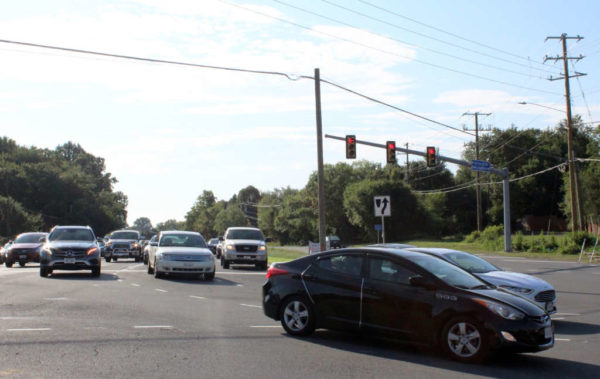 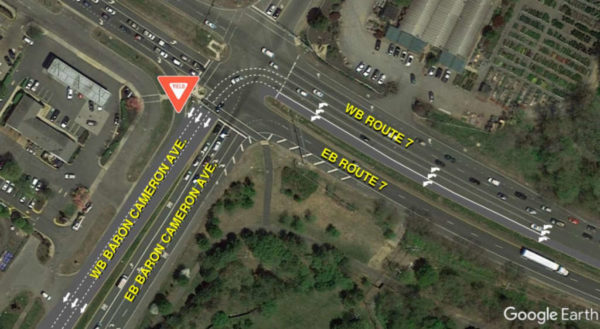 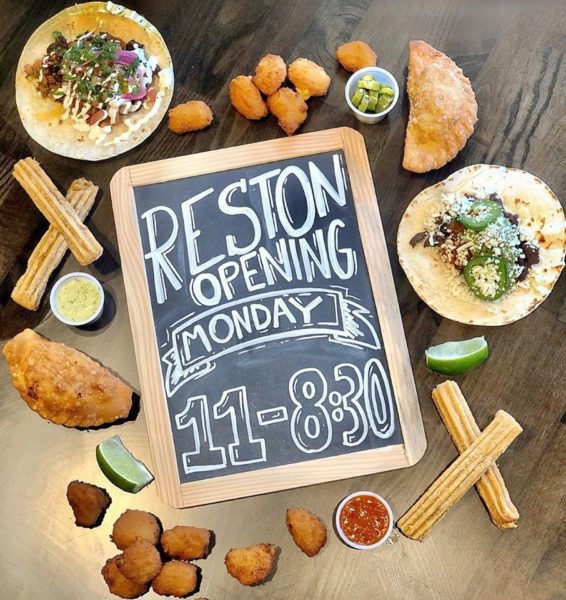 The Mexican restaurant, which serves street-style food, will offer items like tacos, empanadas, street corn, and sliders. It is similar to other locations in Leesburg, Sterling, and Chantilly.

The sign for the storefront will not be installed for another two weeks, a company spokesperson told Reston Now. 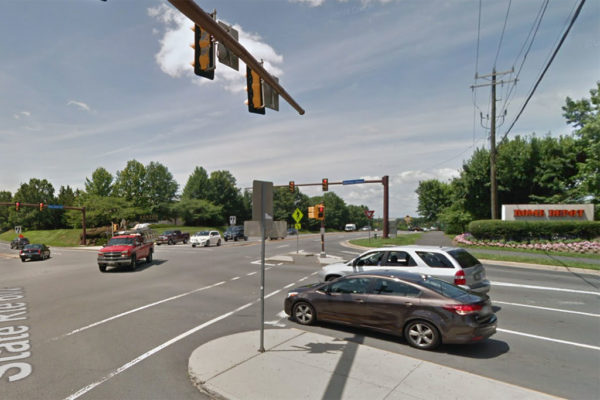 The intersection of Reston Parkway and Baron Cameron Avenue may soon get a makeover.

Fairfax County’s Board of Supervisors approved today (June 4) $500,000 for preliminary engineering and feasibility studies on improving the intersection in Reston.

Back in March, the Reston Transportation Service District Advisory Board OK’d using $500,000 in service district funds for the preliminary engineering and conceptual design.

The funding the Board of Supervisors approved will come from the Reston service district funds. It was part of $55 million approved today for 10 transportation projects in Tysons, Reston and Alexandria, with a bulk of the funding — $51 million — going toward Tysons-area roads.

The funding adjustments from the Tysons and Reston Transportation Service Districts and the Tysons Grid of Streets Road Fund will be made as part of the carryover review for fiscal year 2019, according to the staff report.

Hibiscus Thai Cuisine, a sit-down restaurant located at 11790-A Baron Cameron Avenue, has closed after six years of business.

The owners did not return requests for comment from Reston Now. A closed sign was taped to the door of the business today (Thursday).

We regret to inform you that Hibiscus Thai Cuisine is permanently closed. We thank you for your patronage for the past 6 years of operation. It would not have been possible without you. Our family is so grateful to have served you our recipes of the most delicious Thai food. We hope you’ll always remember your experience here at Hibiscus Thai Cuisine.

County permits do not indicate what will occupy the space once it is vacated.

An armed man was arrested on Thursday (March 22) after hitting  a police officer with his fist and spitting on him, according to the Fairfax County Police Department.

Police arrested Carlos Cherry, 37, at the intersection of Elm Tree Drive and Sycamore View Lane in the Herndon area around 4:15 p.m.. Police said Cherry appeared to be intoxicated. He was charged with assault on a law enforcement officer, brandishing a firearm and intoxication in public.

In a separate incident on Friday (March 23) around noon, a resident found a window broken and items from inside a home on the 12000 block of Laurel Glade Court.

On Sunday, police pursued a wanted individual from Hampton on the 13100 block of Worldgate Drive. After a chase, the suspect, Warren Wendell Maxwell, 25, was arrested for possession of a stolen vehicle and resisting arrest.

In a separate incident on Sunday, Ricardo Sanchez was charged with strangulation and attempted sexual assault. The incident occurred on the 1200 block of Bicksler Court, according to the Herndon Police Department.

Yesterday, we also reported that a Maryland man was killed over the weekend when he lost control over his car on Baron Cameron Avenue and hit a traffic signal pole. The cause of the incident remains under investigation. Alcohol was not a factor, police said.

A 23-year-old man from Maryland died Saturday morning after his car hit a traffic signal pole, according to information released by the Fairfax County Police Department today (March 26).

Police believe Johnny Nony Souvannavong of Upper Marlboro, Md. was driving his Subaru eastbound on Baron Cameron Avenue near Hunter Mill Road when his car’s tire went off into the roadway.

Souvannavong lost control of the car, which crossed over to the eastbound lanes, the center median and westbound lanes. The car then crashed into a traffic signal pole.

The driver was taken to the hospital, where he was pronounced dead.

The crash is still under investigation. Speed may be a factor, according to the police department’s crash reconstruction unit.

5 Comments
News
Reston Farm Market will reopen this month under new ownership.
Work is still being done to renovate the property.
An expanded petting zoo will be part of the fun of the Farm Market.
Previous Image 1/3 Next Image

Bonita Weinstein and her husband, Lowell, took over ownership of the Reston Farm Market (10800 Baron Cameron Ave.) on Aug. 1 and immediately realized they had a lot of work to do.

“When we took on this project, I just thought ‘Yeah, we’ll get in there and we can do it quickly,'” Weinstein said. “We’ve been working on this place for a month now.”

The full renovation project at the business near Leesburg Pike is still in progress, as crews could be seen on the site Thursday morning working to set the new patio and continuing to revamp the barn’s interior. Bonita said they are getting ready for a “soft opening” Tuesday, with a grand-opening celebration scheduled for Saturday, Sept. 23. 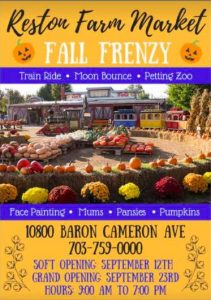 A website that celebrates the “original” Reston Farm Market gives some information about its history. It opened in 1976 and was under the guidance of its founder, Hall Kern, through 1997. It has been owned by several different people since, Weinstein said, and she and her husband are hopeful they will usher in its return to prominence.

“In recent years, the reviews weren’t so great,” she said. “It was run down, but my husband said, ‘We can make it nice [again].'”

The Weinsteins are owners of Seasonal Celebrations garden centers. They have nine locations in the region, including in the Fox Mill and Sugarland Crossing shopping plazas. Bonita said they have high hopes of bringing the success they’ve had with those stores to the Farm Market.

“When people come here, they’re going to be shocked that it’s totally different,” Weinstein said. “We’ve put a lot of money into revamping this place.”

The renovated market will sell fresh produce from local farmers, pies, dairy products, garden supplies and more. Fall decorating supplies including pumpkins and gourds will be available, as will mums and firewood. Christmas trees will be sold when the season arrives.

Kids’ favorites including train rides, moon bounces and an expanded petting zoo will also be on the premises. Parking for the property has been expanded, Weinstein said, and Hoggmeister BBQ will provide a food truck on the weekends.

The grand-opening event Sept. 23 will include a DJ, face painting and more. Food trucks will provide items for purchase, including ice cream, Weinstein said.

The Reston Farm Market is scheduled to be open from 9 a.m. to 7 p.m. each day beginning Tuesday. Weinstein said it will be open through December, and will reopen in March for the spring season. 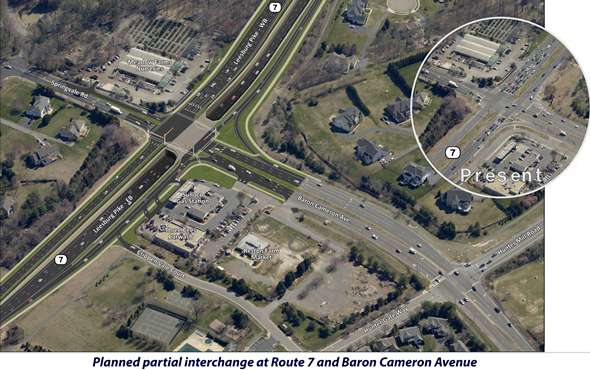 At its meeting Tuesday, the Fairfax County Board of Supervisors gave its seal of approval to plans to widen Leesburg Pike (Route 7) from Reston to Tysons.

The Virginia Department of Transportation project will involve nearly seven miles of Route 7, between Reston Avenue and Jarrett Valley Drive, which is just before the Dulles Toll Road interchange. Supervisors approved the plan, with two minor amendments, as it was presented at a public hearing in November. (View information shared and discussed at that meeting here.)

“[This has been] a long-awaited case,” Hunter Mill Supervisor Cathy Hudgins said at the meeting prior to the vote.

This is the latest stage of VDOT’s work to add two lanes to the heavily traveled highway, bringing it to six overall. They also plan to add facilities for cyclists and pedestrians, and make “substantial intersection and other improvements” along the corridor. Those improvements, according to VDOT, will include constructing a partial interchange at Baron Cameron Avenue to reduce congestion.

A rendering provided by VDOT shows the Baron Cameron interchange will have the eastbound lanes of Route 7 traveling under the road, connected via ramps. Westbound lanes will continue to face a stoplight at the intersection.

Anticipated cost of the project is $234 million. VDOT is expected to put out its request for proposals on the project later this year. Work is planned to start in late 2020 and last until 2025.