A major county effort to restore heavily degraded stream areas at the Snakeden Branch at Lake Audubon is underway and should be completed by October of this year.

The county is working with Reston Association and neighbors to restore 750 linear feet of stream channel. The stream area is so degraded that it exposed sewer pipes between South Lakes Drive, Wakerobin Lane, Cedar Cove Court and Lake Audubon.

“Exposed utilities, including sanitary sewer, are a potential human and environmental health hazard,” according to the county.

Construction began in October last year and is expected to take one year to complete.

The project disturbs a little over half an acre of forested land, requiring the removal of 111 trees. When the project is complete, 326 will be planted, according to data provided by the county.

Once its complete, the project should improve water quality in the area, protect the local sanitary sewer system, remove invasive vegetation at the site, and reforest the area, resulting in improved wildlife habitat.

Here’s more on the project from RA: 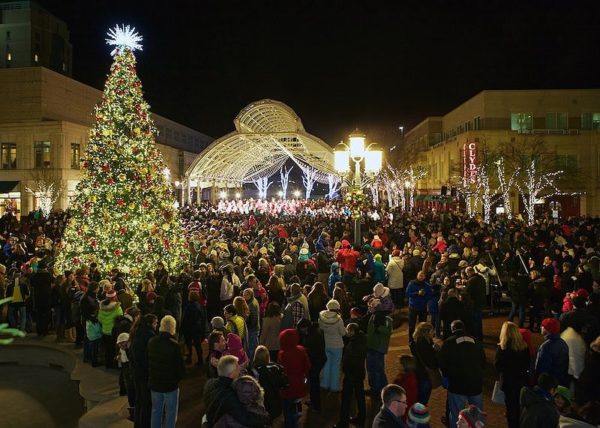 The holiday tree in Reston Town Center is set to light up this Friday (Nov. 29).

This year’s celebration is set to begin at 5 p.m. with a performance from “The Nutcracker” by the Conservatory Ballet before the official tree lighting takes place at 6 p.m.

A half-hour-long holiday sing-along, in conjunction with the Reston Chorale and a brass quartet, will wrap up the evening after the tree is lit.

Attendees are encouraged to show up early and gather around Market Street near Fountain Square (11921 Freedom Drive).

Songbooks will be provided, and there will be a guest appearance from Mr. and Mrs. Claus. 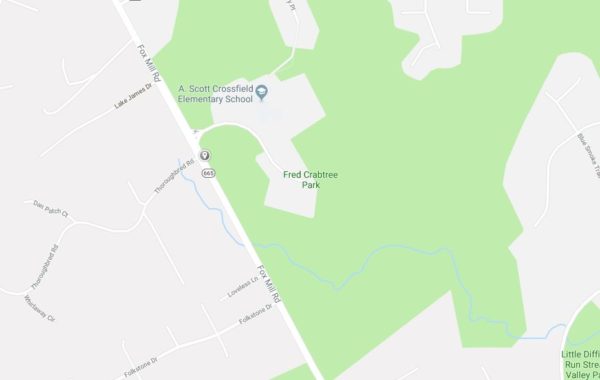 The large tree blocked the entire width of the road near the Reston-Herndon border.

Fairfax County Fire and Rescue crews were busy chainsawing the tree around 12:50 p.m., according to the tweet.

The road reopened around 1:56 p.m., according to a second tweet from the police department. 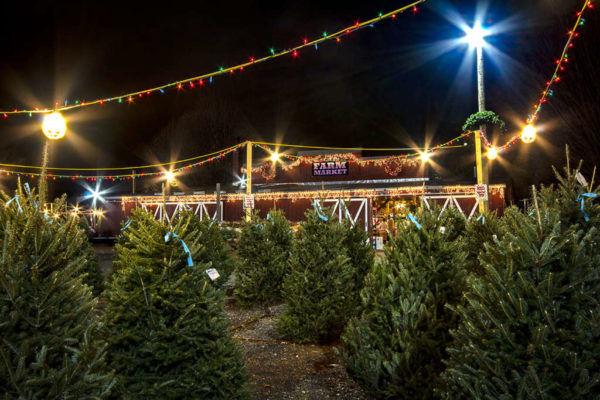 Do you need a holiday tree?

The Christmas Tree Market at the Reston Farm Market (10800 Baron Cameron Ave) will sell trees until 5 p.m. on Dec. 24.

The trees were delivered last Thursday (Dec. 13) to the three community centers that FACETS operates.

The Reston Farm Market provides fresh, locally-sourced produce, dairy and other farm-fresh goods. It will close for the season from Dec. 25 to March 15, but customers can still order firewood products online for delivery. 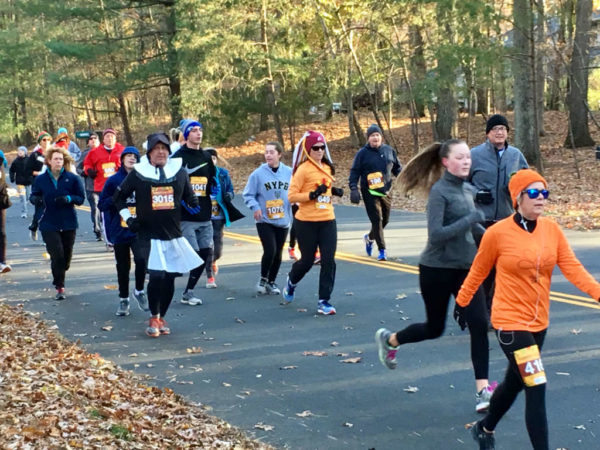 Tackling Reston’s housing inclusiveness — Richard Rothstein, author of “Color of Law: The Forgotten History of How our Government Segregated America,” will lead a discussion on how housing policy impacts equitability and inclusiveness in Northern Virginia communities. An interactive panel discussion with local community experts will follow. The event takes place tonight at the Reston Community Center at 5 p.m. [Reston Community Center]

Investigating how the media impacts victims of crime — Karen Bune, a criminology professor at George Mason University, will dive into the news media’s role related to crime victims and ways to disseminate news without negatively impacting victims, survivors, confidentiality and ongoing investigations. The event is at 7 p.m. at the Herndon Fortnightly Library. [Fairfax County] 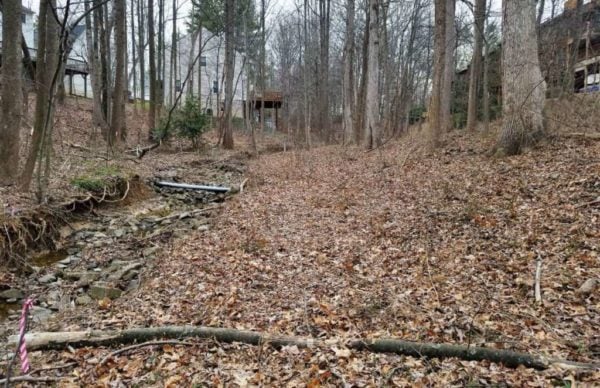 Meghan Fellows, the county’s manager of watershed projects, said a design team has been working on the project, with the input of RA, property owners and residents, for nearly three years.

“The stream is desperately in need of some assistance,” Fellows said at the DRB meeting, noting that portions of the area are degrading significantly.

Richard Newlon, the board’s chairman, said he hopes the project team will minimize the loss of trees by tweaking designs and implementation to conserve trees — even if it meant a minor tweak to save just one tree.

The project was challenged by the need to secure easements across private property and Reston Association property to construct the stream. Land rights for the project were obtained in June following a more than a year-long period of tree and stream surveys and conceptual planning.

After a cycle of revisions, permits were granted in October. After receiving final approval for designs, drawings and permits in the spring of next year, construction is likely to begin in the summer, Fellows said.

Overall, several sanitary crossings in the area are exposed and RA found that 40 trees are likely to fall down if no action is taken. Trees will be replanted during later phases of the project.

County staff estimates the project will cost under $1 million. 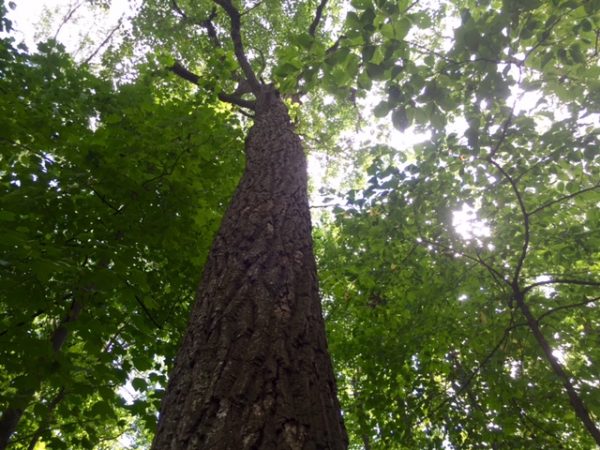 Reston Association will lead a celebration of Arbor Day on Monday (April 2) by planting trees throughout Reston and learning more about the proper planting and care of trees.

An Arbor Day presentation and flag raising ceremony will be held at the Walker Nature Center (11450 State Route 4721) at 11:45 a.m., followed by a free pizza lunch for volunteers who planted trees earlier.

Tree planting will begin at 9:30 a.m. and will occur at various locations throughout Reston. Volunteers will be notified before Arbor Day which exact location they will be planting trees.

Groups are asked to register with Ha Brock by emailing [email protected] or calling 703-435-7986.

Reston is certified by the National Arbor Day Foundation as a Tree City USA, meaning the area celebrates Arbor Day, maintains a tree board or department, spends at least $2 per capita on urban forestry and has a community tree ordinance. As of 2017, Reston has 62,000 trees, according to the foundation. 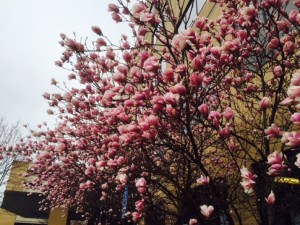 Two seedling packages are being offered for sale. The shrub and small tree package is on sale for $16.95 with 10 seeds, and the tree package features six seedlings for $11.95.

The native seedling sale helps to clean up the water and air. It also helps to prevent soil erosion by keeping the soil in place, said Lily Whitesell, a watershed specialist.

“Across Fairfax County, we’ve really seen a lot of the understory of wooded areas be decimated by deer. We hope this will also help regenerate that growth,” Whitesell said.

Some of the featured plants include Eastern redbud, pawpaw, shortleaf pine, silky dogwood and witchhazel.

To keep the seedlings cheap, they are bought in bulk. If someone were to buy the same seedlings sold by the Northern Virginia Soil and Water Conservation District at the store, it would cost somewhere between $20 and several hundred dollars, she added. 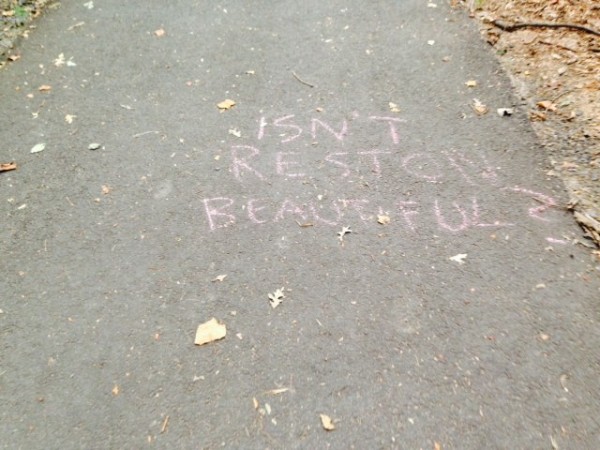 Why Reston is ‘One Better Than Ashburn’ — A recent Money magazine list named Reston the 29th-best place to live in America … and nearby Ashburn the 30th. A local blogger compared the communities in a tongue-in-cheek fashion and determined just how the magazine came to the conclusion that Reston is “Ashburn plus one.” [Restonian] 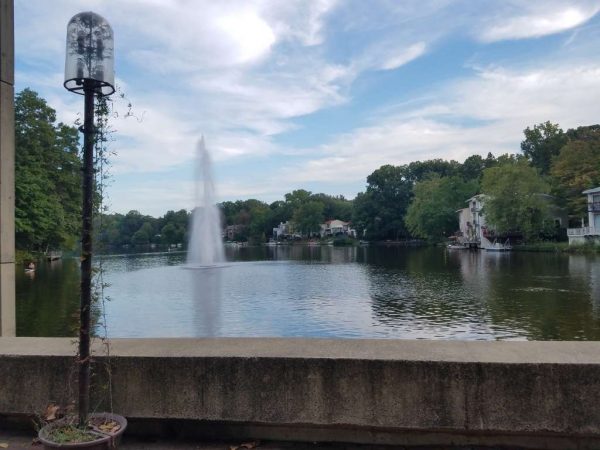 Final Week for Reston Community Center Preference Poll — Three incumbents are seeking to return to the Reston Community Center Board of Governors, and the community preference poll that guides the Fairfax County Board of Supervisors in its choices ends this week. Each property in Small District 5 (SD5) is to have received a ballot in the mail. Mail-in ballots must be received by no later than 5 p.m. on Thursday, Sept. 28, while walk-in and online ballots can be submitted through 5 p.m. the following day. [Reston Now]

Herndon Police Collect Items for Hurricane Relief — The department collected the items to send to Puerto Rico and help residents there recover from the devastation of Hurricane Maria. [Herndon Police/Twitter]

Homeowners Save With Solar Energy — According to Fairfax County, 47 homeowners who signed contracts for discounted systems through Solarize Fairfax County will save about $1,250 per year on their electric bills. [Fairfax County] 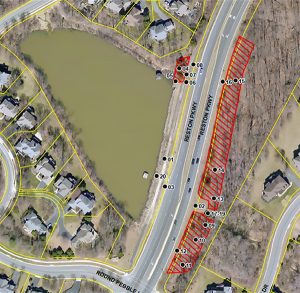 In order to comply with Virginia code regarding flood protection and dam safety, Reston Association crews will remove 143 trees in North Reston next month.

The issue was brought to RA’s attention during a recent dam inspection by GKY & Associates.

Butler Pond is located on the west side of Reston Parkway near the intersection with Route 7. The trees in question line Reston Parkway, with most on the eastern side.

Bright Pond is located on the east side of Reston Parkway, north of the intersection with Wiehle Avenue. The trees in question there are located on the southeastern side of the pond, near Reston Association’s Pink Trail.

RA’s arborist and environmental crews are expected to begin the work during the first week of September. RA plans to replant trees beyond the 25-foot buffer area within the natural area behind Stones Throw Drive, beginning later in September. 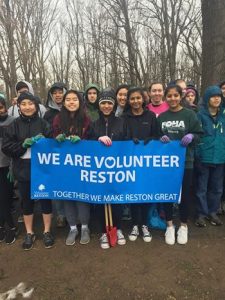 Arbor Day may not officially be until the end of April, but that didn’t stop volunteers in Reston from marking the event a little early.

Friday morning at the Old Trail Natural Area, 70 volunteers and Reston Association staff participated in the community’s an Arbor Day tree planting. The event was a collaboration between Volunteer Reston and the National Wildlife Federation.

According to volunteer supervisor Ha Brock, RA celebrates Arbor Day earlier in the spring so it can stand alone from other Earth Day festivities in the community.

“A big thank you to all our volunteers,” Brock said. “Our work would not be possible without the work of our dedicated volunteers.”

A video showcasing the morning’s work is available on the Volunteer Reston Facebook page. 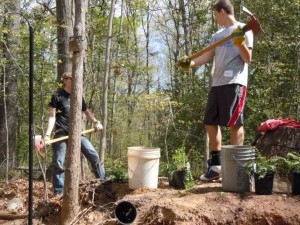 The Fairfax County Board of Supervisors hopes that the county will have 5 percent more trees by 2037.

The 30-years goals for the tree canopy are based on recommendations in the Tree Action Plan, funded by the Environmental Improvement Program.

The goal, formally adopted in 2007, is to increase Fairfax County’s tree cover to 45 percent by the year 2037. Currently, the county has 40 percent tree cover. If tree planting efforts are not increased, by 2037 Fairfax could lose approximately 4 percent of its tree canopy cover.

To reach that goal, an additional 2 million trees — an average of 83,740 trees annually — will have to be planted, says the Fairfax County Urban Forest Management Division. However, they point out that if every resident in Fairfax County plants two trees for every member of their household over the next 30 years, the county will exceed its longterm goal.

The county says it is limited by available space. here. There are only 4,200 acres available for tree planting on county-owned properties and commonly-owned open spaces. Therefore, the majority of tree planting required to meet the 30-year tree canopy goal will have to occur on privately-owned residential lots.

Here is what citizens can do to help Fairfax reach its goal:

The Reston Comprehensive Plan Amendment, adopted by the Board of Supervisors earlier this year, says preservation of natural resources, including “use of closely spaced street trees and landscaping in open space areas to increase tree canopy in the  transit station areas,” is a key element of Reston’s future.

Friends of Reston donated 50 trees to the community in honor of Reston’s 50th anniversary. The trees were planted on Arbor Day. Reston is a Tree City USA as certified by the National Arbor Day Foundation.